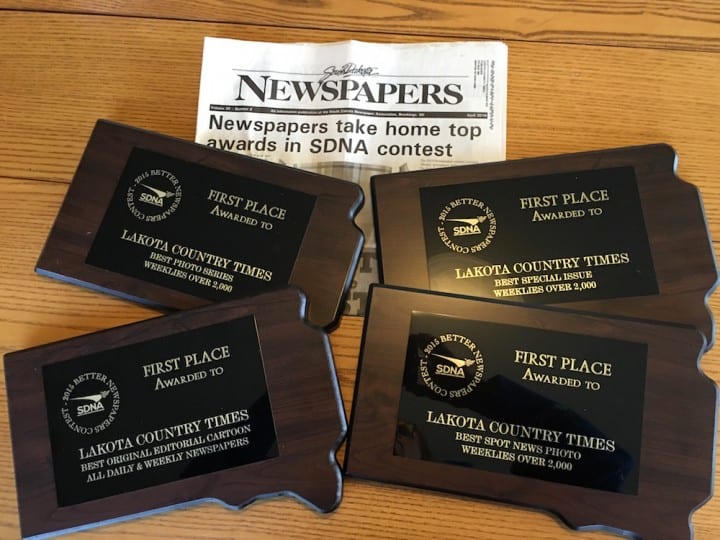 Our Hometown would like to congratulate the Lakota Country Times on its strong showing at the 2016 South Dakota Newspaper Association Newspaper Contest!

“I couldn’t be happier with what this newspaper has grown into in such a short amount of time,” said LCT Publisher and Managing Editor Connie Smith.

At the 2015 SDNA awards, the Martin-based paper where Smith serves as managing editor, salesperson, and newspaper delivery woman had only taken home four awards. This year was very different.

“There was a time when we would have just been happy with placing but we are finally beginning to be recognized for our unique ability to provide a service to Native American people both locally and nationally,” said Smith.

Despite the fact that LCT only has three regular staff writers and a production team consisting of longtime layout veteran Jason Wolters, and Smith’s daughter, Jenni Giovannetti, the paper has managed to garner nearly 250k followers on Facebook.

“The reason why we have such a large following is that there is an absence of content out there created by people from reservation communities. With Tim Giago retiring, there was a void left in this industry and the team I work with at Lakota Country Times was finally ready to step up and fill it,” said Brandon Ecoffey, editor of LCT. “There is something to be said about authenticity and about having real relationships with the people who you serve. We write about our family and about people we have grown up with. That perspective cannot be replicated.”