Disaster Prep for Newspapers: Lessons from the Texas Blizzard 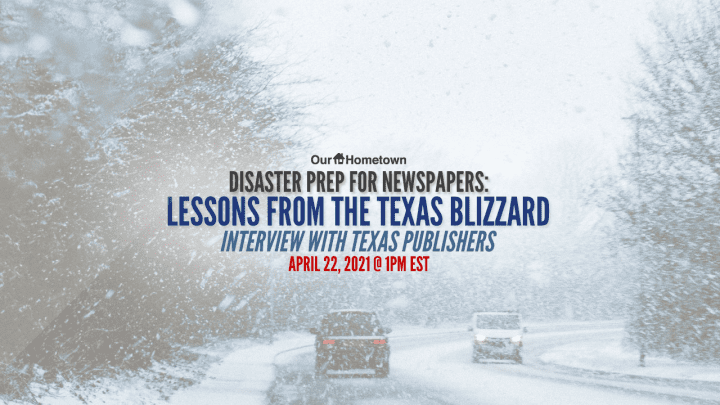 Last month, the state of Texas was hit with a rare winter storm that brought snow, bitter cold temperatures and slick, icy roads to residents unaccustomed to such conditions. Power grids across the state failed due to the high usage of heat and energy, ultimately leaving as many as 3.5 million Texans without heat or power for several days.

Caught in the middle of all of this were the local and regional newspapers forced to abruptly halt production due to blackouts, lack of resources, and the inability to travel due to the dangerous conditions. Even those newspapers who were able to piece together an edition still faced the reality that their printers and delivery drivers may not be available.

For many publishers across Texas, the storm highlighted the importance of being prepared for disaster scenarios, and made them consider what they can do differently to allow themselves to continue reporting the news during similar events in the future.

Our-Hometown President & CEO Matthew Larson will be joined by representatives from papers across the state of Texas for a LIVE discussion on Disaster Prep for Newspapers on Thursday, April 22nd at 1PM EST, where together they’ll share some of these ideas with the audience as well as detail the challenges their staff faced during the storm.

Any publishers in Texas who were affected by the storm are invited to join the conversation and share their own thoughts and ideas with our audience. If interested in participating, simply drop us a line at ops@our-hometown.com!

If you’re interested in listening in LIVE, click here to Register Now and reserve your seat for April 22nd!