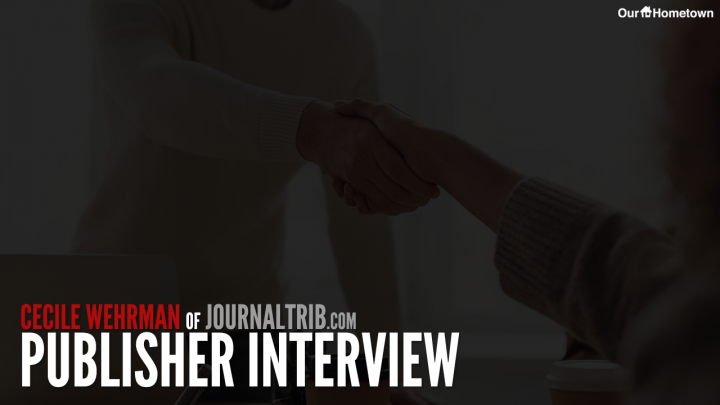 While the challenges that the COVID-19 pandemic has presented to newspapers across the country are well-documented, there has been a promising trend: communities and readers have shown that they are willing to support their local news. Cecile Wehrman, publisher of The Journal and The Tioga Tribune, recently joined Our-Hometown’s CEO Matt Larson to discuss how she’s tackled the issues her publications have faced throughout the pandemic, and how asking the community for help has paid huge dividends in the form of donations from her readers.

The full-length interview is available on our YouTube channel, but we’ll cover some of the highlights below!

1. Asking for Help & Response from Readers

Cecile has created a Donations page on JournalTrib.com that includes a message to her readers and a form that they can fill out to submit a donation. Once advertisers began dropping off, there was no sense in being “too proud” to ask for help. After all, newspapers play a critical role in keeping communities informed and, in many ways, keeping them connected — so asking the community to return the favor is nothing to be ashamed of.

Once the donations began coming in, even Cecile was surprised at how willing readers are to donate. Donations have come in both from the online form as well as from checks that readers have mailed in. She notes that many of the donations they’ve received were from customers who had renewed their subscription relatively recently, which demonstrates that readers are willing to help out despite having just recently paid their annual or monthly subscription fee. She even mentions a very generous donation offer she received from a freelance writer that contributes to the papers a few times a year.

Cecile wasn’t too aggressive in asking for help, either. Articles and editorial content have made mention of the dire situation and included a plea for help, and there is a button at the top of the website as well as at the end of articles published on the website — but it isn’t like they are bombarding readers with popups, e-mails, or phone calls. They’ve found a happy medium and the results have been encouraging.

Aside from asking for donations, Cecile has had to consider other changes as well in order to stay financially stable. She advocated for a forgiveable loans program in her community where businesses would be able to apply for a loan which would include ad credits they could use to promote their business in the newspapers. The program aims to help the community as a whole — from the small business, to the newspaper, to the consumer.

In the clip below, Cecile jokes how calling businesses to let them know they have ad credits to spend and discuss the best way to use that credit has made for a fun week!

Later in the interview, Cecile stresses the importance of updating revenue models now rather than waiting until it is too late. She mentions the need to market to the younger generation as a way to replace older, lifelong subscribers who are now in their 80’s and 90’s, and how the pandemic has expedited the need to consider alternative methods of generating revenue.

Fortunately for Cecile, we’re here to help her achieve her goals every step of the way! In the following clip, Cecile discusses how Our-Hometown’s features have helped her bring her publications to the digital age by providing HTML articles, a modern PDF viewer, web advertisements, and subscriptions that include auto-renewal options. For a fair and affordable price, Our-Hometown’s service saves Cecile time and earns her money in ways that were not possible before.

Be sure to check out the full-length interview on our YouTube channel, and e-mail ops@our-hometown.com if you have any questions or comments!